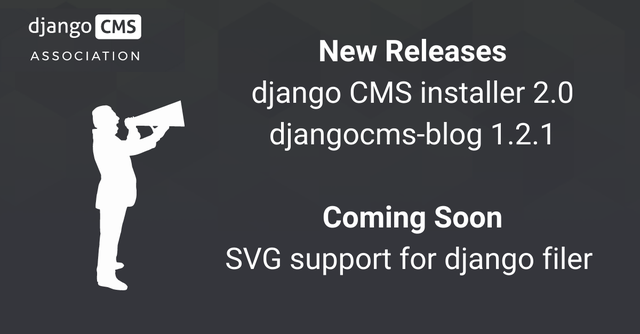 This release adds support for djangocms 3.8 and Django 3.1, and also updates the packaging and the code formatting to make it easier to update it.

This release brings in a major feature to allow extending the post data with custom attributes for even greater flexibility, check the documentation for details. In terms of documentation we worked hard to improve the setup docs especially tailored for Django / django CMS newcomers.

The next major release of django-filer will support SVG images. This means that SVG images can be uploaded just like PNGs or JPEGs and used by existing templatetags such as thumbnail. The latter is important, because users of django-filer not always know where their uploaded images finally will be rendered. Therefore django-filer requires a new version of easy-thumbnails, which also will be released soon. This library will crop and scale SVG images, similar to pixel-based images. This can be done easily by changing the width, height and bounding box of an SVG image. In addition to this, the new version of django-filer will be shipped with nicer looking icons, of course also in SVG.

On behalf of the django CMS Association I would like to thank everyone involved in these releases and special shout outs to Iacopo and Jacob for their amazing contribtuition! You guys rock!