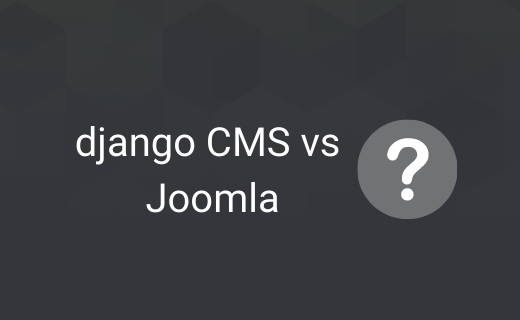 With django CMS and Joomla, you can relax and quickly start developing your site. But the two systems have an important difference which explains their differing popularity, and that's their programming language.

Joomla employs PHP which is also used by bigger platforms such as WordPress. It’s the most popular programming language and this familiarity is why many developers choose Joomla. A content management system running with PHP gives you lots of options to customise your site.

But django CMS doesn’t use PHP. Instead, it runs with Python, which is the world’s fastest-growing programming language. Developers of all abilities are flocking to platforms which use Python because of the security they offer your site. It’s for this reason that market leaders like Facebook, YouTube, Netflix and Spotify all use a CMS with a Python programming language.

While the two platforms provide your site differing levels of protection and customisation, both django CMS and Joomla offer interfaces which are easy-to-use regardless of your development experience.

The best choice depends first on whether you feel each platform provides enough security for your site, and secondly how much control you want over your site. 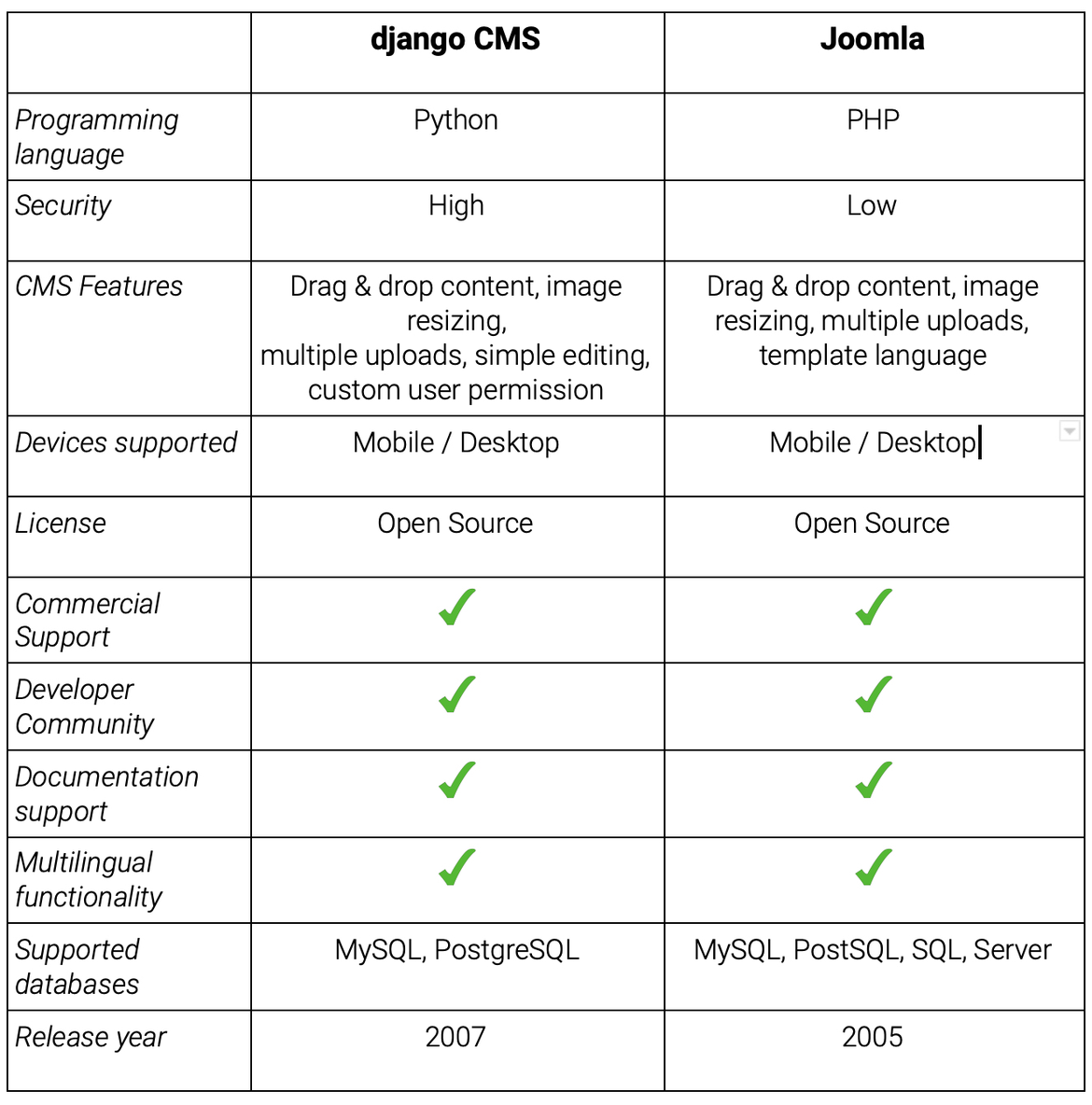 What differences will you enjoy with django CMS vs Joomla?

Joomla has many of the benefits you’d expect from a CMS using PHP:

Systems like django CMS that use Python are increasingly popular with developers who value security and privacy.

Organisations that store sensitive data like Facebook, the CIA and many government departments rely on CMSs that use Python for their security.

django CMS uses that same Python programming language but provides a simple framework for users who don’t need such an extensive range of functions. The platform is easy-to-use while still offering you built-in security features which protect your site against a range of security threats.

CMSs that use PHP like Joomla continue to improve their security thanks to the work of their large communities. But these efforts haven’t stopped Python from becoming the fastest-growing programming language in the world.

Joomla is a developer-focused CMS and it has a large programmer community who regularly create new plugins. However, as these plugins are not designed by Joomla itself, beginners may struggle to get support for potential problems when they’ve extended their site’s capabilities.

This shouldn’t deter experienced developers though who will enjoy the customisation such plugins provide. And users of all abilities can quickly create a smart-looking site with one of the many templates available in Joomla’s library.

django CMS is a free and open-source CMS used by thousands of businesses and individuals. The platform’s multilingual interface and web projects make it popular around the world and with international teams working across many languages.

The system’s drag and drop editing function means anyone can easily create professional-looking websites while managing large quantities of images, files and other content.

You can also quickly integrate django CMS with its many free plugins that give you greater control over your site.

Who uses django CMS vs Joomla?

django CMS’s simple interface and multilingual capabilities are well-suited to e-commerce and company websites. That’s why the platform is loved by users from around the world including NASA, National Geographic and L’oreal.

Joomla’s selection of plugins makes it popular with developers who want high customisation for their site. The platforms most prominent users include Nintendo Nordic and General Electric Russia.

If you’re familiar with a CMS like WordPress and who want to remain with a platform that uses a PHP programming language, then Joomla is a great choice.

However, no CMS can keep your data and website as safe as django CMS. The platform guarantees your site’s security while giving developers the same ease-of-use as popular PHP platforms.