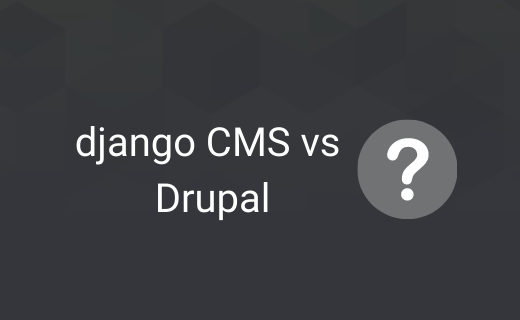 But it's not true that everyone will be just as happy with either platform. The wrong choice could result in you spending days learning a seemingly impossible interface. Or you may realise after many months that you're desperately missing a unique function for your site.

django CMS has one of the simplest interfaces of any CMS on the market. Even a beginner can edit content quickly without the help of a developer. However, that simplicity is only possible by prioritising the most important features. Users running complex sites out of the box will need to install plugins (Django apps can be easily integrated) or may even be better served by a more sophisticated CMS, like Drupal.

Drupal isn't an impossible interface to master, but it may seem like it if you're not a confident developer. That’s because Drupal is a CMS built for advanced developers by a community of advanced developers. Its users have often built websites in the past with other PHP-based platforms like WordPress and they now want a level of customisation you may not find with another platform.

The two platforms’ respective learning curve is their most important difference, but it isn’t the only consideration. Advanced developers may yet prefer the intuitiveness of django CMS while a beginner may ultimately want Drupal if they process lots of data.

That’s a lot to consider. So which CMS is best for you? 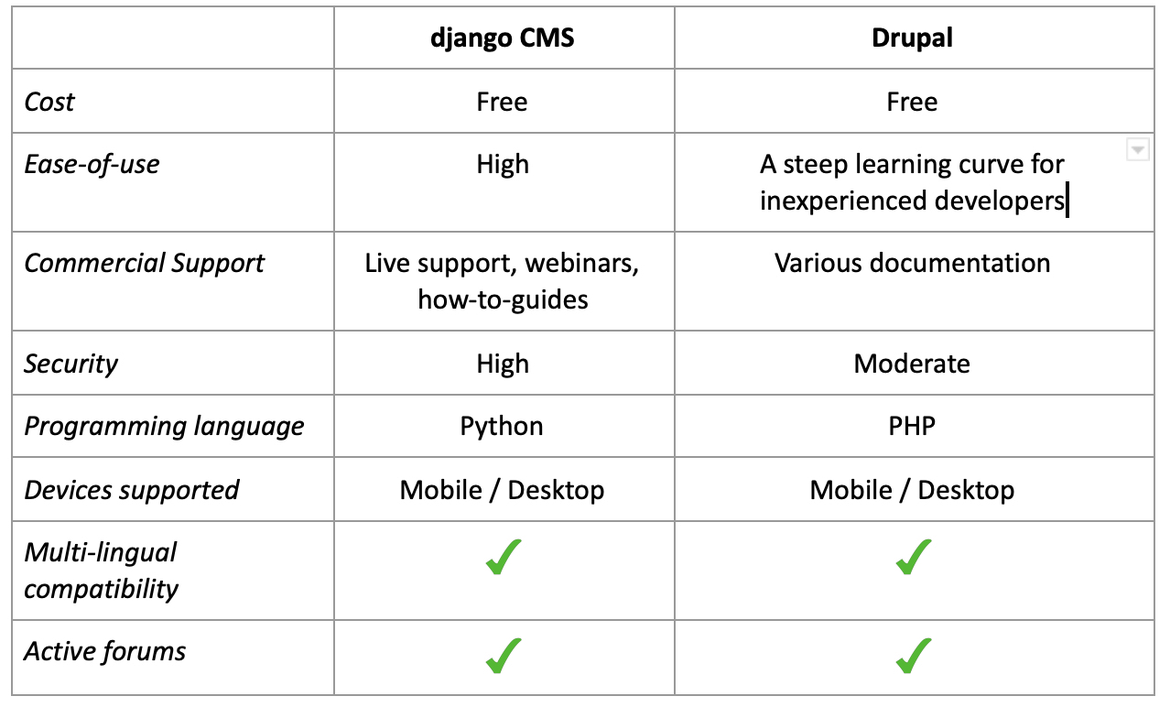 django CMS is loved by developers and frontend-editors

django CMS is a CMS built for developers and content editors. Due to its lightweight core developers can integrate other existing Django applications rapidly, or build brand new compatible apps that take advantage of django CMS's publishing and editing features.

django CMS is user friendly and has a very intuitive drag and drop interface, which is also useful for content editors.

While the platform focuses on simplicity, most users will still enjoy all the features they need to make their website a success. django CMS comes with integrated statistics, quiz tools, a spell checker and a CAPTCHA test which helps your website determine whether visitors to your site are genuine or spam robots.

Another key aspect of django CMS: It is built around the needs of multilingual publishing by default, not as an afterthought: all websites, pages and content can exist in multiple language versions.

Finally, you’ll receive instant replies from the platform’s team of developers via Slack. So even if you do encounter a problem, an expert programmer will always be there to help.

Drupal is built for developers and power users

Drupal has many similar features to WordPress and indeed the two platforms are built with the same PHP scripting language.

But Drupal’s standout quality is its high level of customisation. Yes, it takes some learning and some users complain about the lack of how-to guides and tutorials. However, once you’ve mastered the platform you’ll enjoy thousands of modules and plugins that you won’t find with WordPress and even django CMS. Some of Drupal’s most popular functions include advanced menu management, graphics modification tools and much more.

However, there comes a point when you want to make a customization to the website that is not available through one of the many modules . The consequence is that the customization of the website becomes more complicated. In comparison: django CMS has fewer plugins and modules, but because of the Django framework and the Python programming language, it is very easy to write and integrate your own plugins.

Drupal’s extensive range of features comes with one unavoidable drawback: the more plugins and modules you add the greater the server load generated. But this problem is inevitable for any website with high levels of customisation and your website can still run smoothly with proper maintenance.

What differences will you enjoy with django CMS vs Drupal?

Drupal suits the complex needs of the most advanced developers:

Who uses django CMS vs Drupal?

django CMS is popular with Django enthusiasts and Python lovers. Both developers and frontend users enjoy the simplicity of the platform’s interface. Notable users like L’oreal, NASA and National Geographic all love django CMS because its intuitive interface gives them more time to develop and improve their businesses.

Drupal is a great fit for sites that are constantly adding new content, like The Economist and the Louvre museum. Companies like Tesla also enjoy the platform’s high-level of customisation which helps them process high traffic and lots of data.

Which CMS should you choose?

If you’ve liked using a CMS like WordPress and want a PHP-based platform with high-levels of customisation, then Drupal is a great choice. Once you’ve mastered the system’s interface you can easily manage even the most complex sites. But most users don’t require such high levels of control and instead need ease-of-use for their website to flourish. That’s why django CMS provides all the core functions on the simplest interface available on the market. Finally, django CMS is specially built so that you can easily transfer all your data and files should your needs change and you move to another CMS.